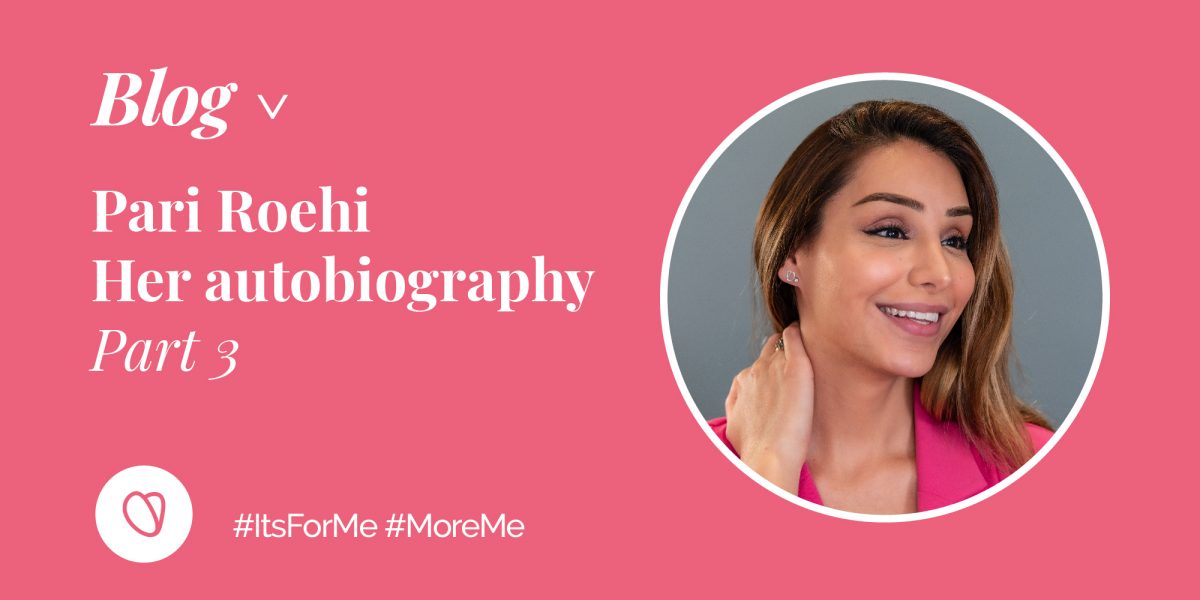 Pari Roehi’s autobiographical book was published in German just after her Facialteam surgery in the year 2016. This is the 3rd post in an exclusive series featuring currently unpublished English excerpts of her book. So her story continues…

Because the planet almost lost that beautiful, precocious personality that is Pari in the midst of those fiery, vulnerable young years, which nearly swallowed her whole. She was forced to the brink of no more and almost gave up on her ideas of paradise.

Almost became yet another suicide statistic of the trans community. Almost.

Yet with a bit of good fortune–along with a large dose of personal strength– were in the cards.  Finally, after five years of waiting and only 19 years old, the long wait for “bottom surgery” ends. Pari manages to clean up her act and get approval for the first of several gender affirming procedures undergone over the years.

“I was so relieved that I almost burst into tears…I had a surgery appointment, finally, after such a long time! …It was a huge relief for all of us. The surgery would close a chapter in my life at last.”

Pari’s pipe-dreams were all on pause pending her medical transition. The excitement to finally have a date for GCS, only kept worries at bay temporarily as the surgeon’s words would echo around in her teenage mind– months of pain, risk of death, blood loss, no libido, dilation, scarring. So many uncertainties to face, so young, but for trans people this is a matter of survival.

Pari was fortunate to have supporting friends and family around during recovery. The occassional mishap due to that typical teen stubborness (like eating too soon after anesthesia leads to vomiting) teach Pari important lessons along the way. Yet her great fortune was not lost on her.

“Suddenly, a thought flashed across my mind – I was completely healthy; I was only lying there because I myself had decided to have this surgery. I was overwhelmed with gratitude.”

She remembers fondly how understanding her mother and step-father were in the healing period, tolerating emotional outbursts.  Her relationship with her brother improved too.  Perhaps this helped her faced the prospect of the most dreaded and necessary part of vaginoplasty postop:  dilating.

“But even touching the area was so painful that I cried. I started howling and thought I’d never be able to do it when Mom came in.”

Yet as time passes, and her family throws a celebratory party for her, she is able to forget the pain a bit and the anxiety about her future.  As youth often are, she was impatient to heal, keen to jump back into social life and the months seemed like a depressing eternity.

A kind of rebirth

It took months. Her self-concious mind made her worry about many things. Did people smell the wound? A loose stitch means something has gone wrong? When will the pain subside? How can I sit comfortably? How to walk?  How to pee sitting and avoiding peeing myself?

Three months after, she was back to work and stubbornly skipped going for her checkup appointment with the psychologists as all was going so well.  However, depression was still an insipid presence.

“Looking back, I often wonder at what point in my life I had truly managed to overcome my depression after the operation.”

At this point in her story, Pari mentions the outpourings of love from friends and family on her first birthday after surgery.  A glamorous party thrown for her by her boss at the club, Mr. Woo, for 100 friends where she was buried in gifts.  Her brother calls her his “little sister.”

“I had been this kid who didn’t know who she was. Now I had become Pari.”

Lilia recorded Pari speaking about her life story in December 2020, which is published in part in her 2016 autobiography, Mein bunter Schatten: Lebensweg einer Transgender-Frau. Currently only available in German, it’s an account pending release in American English. The working title is, “The girl with a boy’s shadow,” although the literal translation from German is actually “My colorful shadow: The life of a transgender woman.”

This is another unique and poignant story of a trans woman obliged to work extra-hard in order to get where she is. The story of a woman who continues to strive for her goals, despite the obstacles that come her way.  Just another human on the planet finding her way in the world, the girl next door that’s continues to make her mark.

This series of autobiographical excerpts are the story of Pari’s self-discovery, with its inevitable rollercoaster ride, towards self-authenticity.

Most notably, she has participated in Germany’s Top Model, is working in Hollywood, speaks 6 different tongues and is one of the Pantene Pro-V Ambassadors highlighting #transisbeautiful.  With several independent film projects in the works, keep an eye on her Youtube channel “Keeping it Classy.”

Stay tuned for more inspiring stories of a life of perseverance, against all odds, in seeking acceptance as the girl she has always been.

Blog author: Lilia Koss, Community Manager,  a Facialteamer since before we knew it existed.