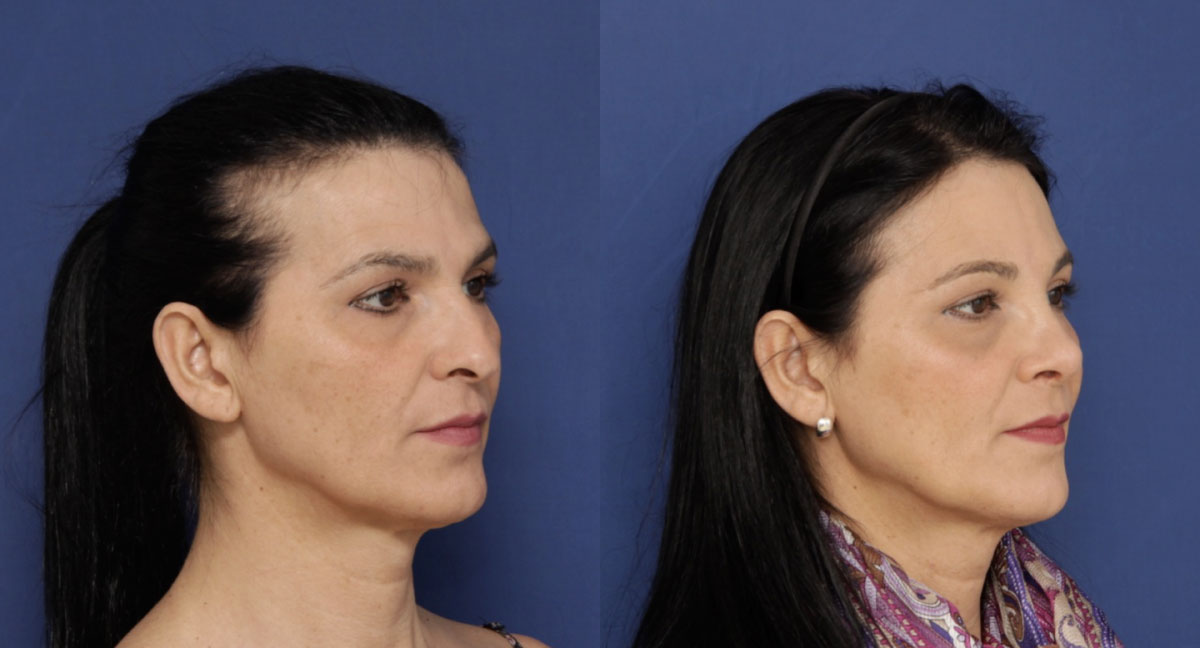 What Makes for a Feminine Hairline? A Guide for FFS Patients

It’s easy to understand why the upper portion of the face is so important for any patient considering facial feminization surgery.

After all, when we interact with other people, we spend most of our time making eye contact with them!

The top third of the face is the part that gets seen the most. The form, shape and volumes of this area plays an important role in gender recognition. Even more so since mask wearing has become standard practice and the bottom two thirds of the face are often covered.

It includes the eyes, the notorious “windows to the soul.” And two of the most important facial gender markers: the brow bone and the hairline.
Facial gender markers are aspects of a person’s face structure that lead other people to make judgments about their gender. There are many of them, and the goal of FFS surgery is to make masculine features appear more feminine.

However, not all facial gender markers are equally important to the overall impression created.

A perfect example of this is a strong, angular jawline. Most people think of this type of jaw as being masculine. But it can actually work perfectly as part of a face with an overall feminine appearance. Just look at beautiful actresses like Angelina Jolie for proof of this.

The hairline happens to be one of the more important gender markers on the face. Part of this is because of the effects of so-called “male pattern baldness”.

But even without a receding hairline, this area of the face sends gender cues to our processing brain.

Transfeminine or feminine leaning non-binary individuals opting for FFS surgery often request hairline feminization. Or our specialists recommend it, as it can be key in creating the overall feminine look that we’re aiming for.

Hairline height, or the distance between the hairline and the brow, is somewhat controversial among today’s FFS surgeons.

It used to be widely accepted that a female forehead was smaller than a male one. Common practice was to do a hairline advance procedure to bring it forward.

However, research by Alexandra Hamer of Virtual FFS shows that female hairlines are actually slightly higher, on average, than male hairlines that haven’t receded due to balding.

Now, the top experts in the field of facial feminization surgery agree that most patients won’t benefit from FFS hairline lowering.

In fact, this procedure results in a scar along the hairline. If it’s made too low, it can actually make the face look even more masculine.

Importance of a feminine hairline shape

Much more beneficial than adjusting the height of the hairline for FFS patients is modifying its shape to give it a more feminine look.

The characteristic shape of a typical masculine hairline may also be the reason behind the misconception that female hairlines are lower.

The average male hairline, before any balding has taken place, has an M-shape: lower in the middle and higher on the sides. In contrast, the average female hairline has a smooth, rounded shape, making its highest point in the center of the forehead.

Because of this, the most effective way to create a more feminine hairline in most FFS patients is to redefine its shape using simultaneous hair transplants or SHT.

Facialteam has pioneered one of the most advanced hairline feminization procedures. It combines these hair transplants with simultaneous forehead reduction surgery.

Our specialists have published a scientific article on this technique which is now being referenced in many other studies on hairline feminization.
The benefit of this is that the entire upper portion of the face can be feminized in a single procedure, with no visible scarring.

If the thought of hair transplants brings images of doll hair “plugs” to mind, don’t worry. Today’s specialists transfer individual hair follicles, so that the results look completely natural when the hairline has been correctly designed.

In this way, the recessions near the temples can be filled in, rounding out the overall shape and creating a more feminine appearance.

Hair density for a feminine hairline

For patients with thinning hair at the hairline due to hormonal causes, increasing the density of the hair around the hairline may be another goal of hairline feminization.

This is achieved through hair follicle transplants. The density can often be improved at the same time the shape is being redefined, depending on each patient’s individual case.

Sometimes, when hair loss has been extensive or if the natural tips of the M-shape are particularly high, more than one hair transplant procedure may be required for optimum results.

Creating a more feminine hairline in FFS patients is as much an art as it is a science. A person’s unique facial features should be taken into account to ensure the final result is harmonious and balanced.

Deliberate irregularity and artistry in the placement of transplants at the hands of a skilled surgeon contributes to a natural looking hairline that patients can be proud of.

In short, the most important aspects of a feminine hairline are its rounded shape and lack of male pattern baldness. Hairline lowering surgeries, and the scars they entail, are no longer considered appropriate for a majority of patients.

Hair transplants, however, are a very effective technique for hairline feminization, leading to beautiful, natural results. Alternatives, such as microfeminization, may also help with enhancing the feminine look of the hairline.