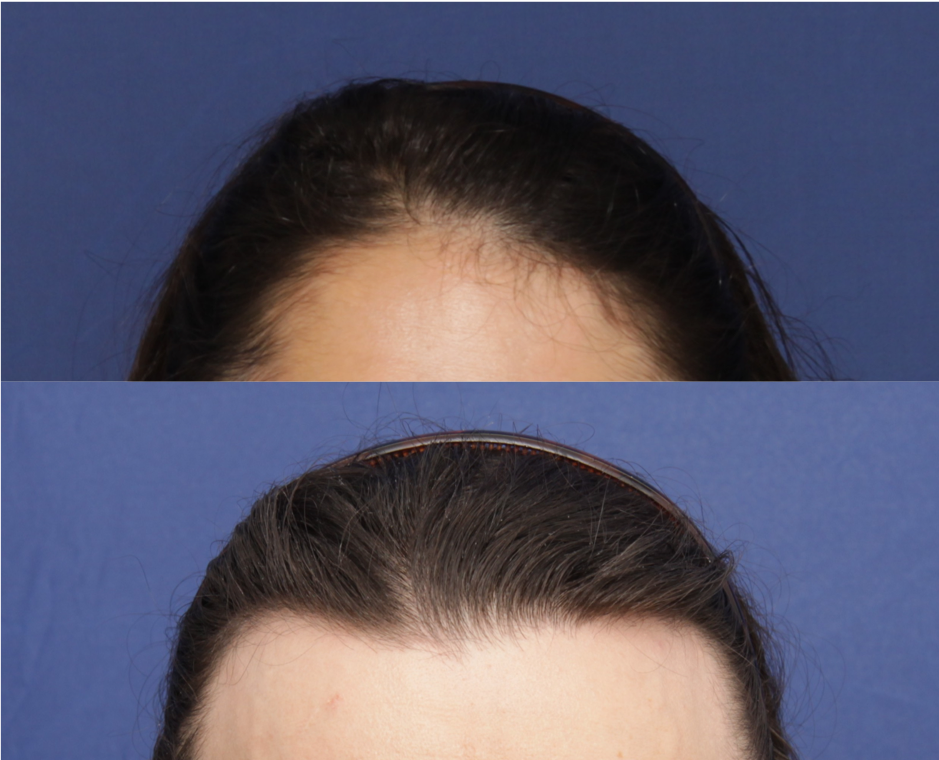 Options for a feminine hairline

A feminine hairline. Here, the complexity as explained by our experts.

This informative article responds to some of the questions that often arise related to a surgical lowering through the hairline, the coronal approach and how to redefine the format for a more feminine hairline.

First, we should analyze the general characteristics of the hairline, both male and female:

Keep in mind, the hairline itself is naturally irregular, with hairs distributed randomly (Fig. 3).

Secondly, we should define a set of basic concepts before getting into the subject matter:

To reach the forehead and do the bone recontouring, it is necessary to enter through the scalp and detach it from the bone.

There are two main ways to reach the forehead bone (frontal bone): an approach through the hairline (direct incision over the hairline) or a coronal approach (incision located in the top of the head, hidden within the hair).

Both approaches (hairline and coronal), not only serve as an access point to the forehead, but also can redefine the format and/or increase the hair density on the hairline. With the hairline approach, or surgical lowering, the hairline is physically pulled down. On the other hand, the coronal approach, takes advantage of the follicular units obtained from the scalp for an immediate hair transplant in the alopecic areas, such as where the hair is receding at the temples and/or the central hairline.

10 points to consider for a more feminine hairline

Having defined these general concepts, we identify and analyze the advantages and disadvantages associated with surgically lowering the hairline in comparison to redesign of the hairline through hair transplants. To that end, we have created a TEN-POINT GUIDE to explain all the particular factors related to these hairline feminising procedures:

Final note on SHT: a feminine hairline and forehead, simultaneously

Finally, we’d like to stress the viability of a hair transplant simultaneous to forehead recontouring. Many professionals argue that the quality of the hair obtained from the coronal area (anterior approach) is not adequate for a hair transplant. First, it is important to remember that the alopecia in patients who undergo facial gender confirmation surgery has stabilized as a result of hormone and/or specific treatments. Oral treatment with Finasteride and other anti-androgens has demonstrated its effectiveness in the treatment of androgenetic alopecia in both men and women, decreasing the progression of the phenomenon and inducing moderate new hair growth. Second, the decision about the donor area of the coronal approach (anterior or posterior) is determined in advance by an exhaustive study that includes different clinical parameters like alopecic area format, hair density, and the phenomena of miniaturization. If the density is not sufficient or the hair quality is less than ideal in the anterior coronal approach, the scalp incision is simply made in a more posterior part of the head where optimal follicles may be harvested.

Thank you for fully reading the explanations behind surgically obtaining a feminine hairline. We hope this description of the advantages and disadvantages have been clarified for a better understanding of the procedures.