Facial feminization surgery of the upper third of the face.

Our years of research and experience in facial feminization have allowed us to hone and perfect our procedures.

We have learned that performing individual procedures to address a certain facial feature is often not the right course of action.

It’s important to take an global approach to facial feminization to provide our patients with the best possible results.

Our cutting-edge techniques mean we can perform hairline reconstruction while also reconstructing the forehead. That means our patients save time and money while getting optimal results, in a single surgical operation.

Here is a diagram with facial prototypes created by superimposing almost two dozen faces to create an “average” face, created by the facial gender analyst Alexandra Hamer of VirtualFFS.co.uk.

The upper third of the face contains two gender characteristics that are particularly important for facial feminization: the bone structure of the forehead and the hairline.

As you can see, a typical female forehead is relatively smoother, more rounded and with a less prominent brow ridge. The hairline generally has a more inverted u-shape compared to the M-shape often seen in masculine hairlines.

For this reason, many patients are able to obtain much more impressive results from their forehead reconstruction surgery when it’s enhanced with a simultaneous hairline feminization procedure.

A comprehensive feminization of the hairline requires reduction of the peaks and recessions in the corners which create this characteristic M-shape.

It also involves rounding out the overall shape, improving hairline density and, on more rare occasions, altering the height of the hairline.

Alexandra Hamer has raised the red flags regarding the widely held misconception today, even among FFS surgeons, that a female forehead is typically shorter than a male one. A persistent fallacy which her analysis disproves.

Unfortunately, the assumption has lead to many unnecessary, and sometimes counterproductive, hairline lowering procedures. In fact, the female hairline is actually higher when measured proportionally against the rest of the facial features. Excessively low hairlines are not aesthetically pleasing.

Notice in Hamer’s prototypes that the distance between the eye and the center point of the hairline is similar, debunking the myth that male hairlines are higher when it is just the shape that causes this optical illusion. According to statistical measurements, female and male hairlines have similar heights, so opting for hairline advancements is not technically feminizing.

At Facialteam, we are able to provide our FFS patients with the best results thanks to analytical research in facial gender. Also an acclaimed expert in virtual facial simulations, in her 14+ years of research, Ms. Hamer has found that:

“Bringing the whole hairline forwards is not only unnecessary in a majority of cases but can sometimes even be detrimental and mildly masculinizing.”

Developing better surgical methods on new facial gender theory, we now have a better understanding of what to alter in order to make a forehead and hairline appear more feminine.

HLS has long been a key component in facial feminization surgery due to this misconception about hairline height and despite it’s multiple pitfalls:

1) The possibility of leaving a visible scar in a highly exposed part of the face.
2) The possibility of making the forehead too short in the centre, which can look unnatural.
3) More complicated to later create a rounded hairline format by filling in the corner recessions

That being said, hairline lowering or scalp advancement is occasionally indicated in a small number of cases. According to our experience data of over 3000 facial feminization patients, HLS only is suitable for one out of every 20 cases, or 5% of all transfeminine patients.

Our aim is to provide our patients with the best possible results in forehead feminization.

It allows for forehead reconstruction and hairline redefinition with hair grafts to be performed in one-day procedure, one-time operating theatre fee and without visible scars.

It allows patients to achieve exceptional and natural looking results for the upper third of the face in a single intervention, which minimizes the risks commonly associated with prolonged general anesthesia (hair transplants are performed under mild sedation, not general anesthesia). 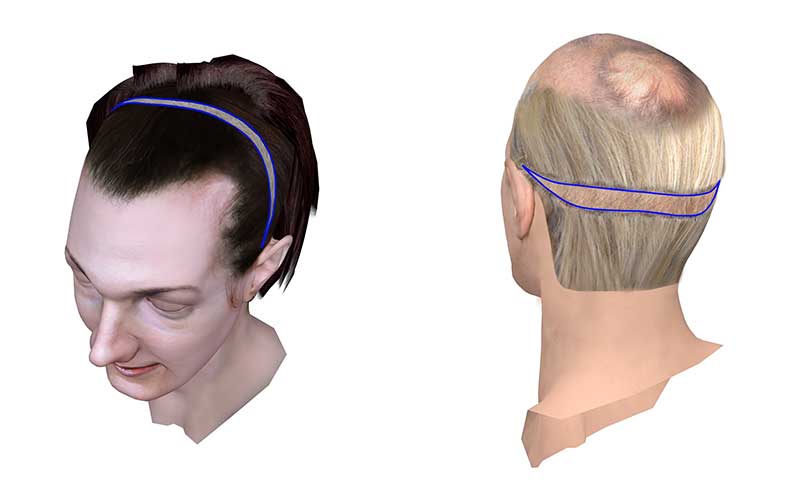 In 2010, Facialteam incorporated a common craniofacial procedure to access the frontal-orbital region for forehead reconstruction through an incision hidden in the hair near the crown of the head, hence referred to as the “coronal approach.”

This prevents unsightly scars at the hairline in cases where a hairline lowering is not recommended (95% of patients).

The results of this procedure have proven to be aesthetically pleasing and natural looking.

For nearly a decade now, we have provided the joint approach for the upper facial third to FFS patients.

It allows for overall redefinition of this prominent area of the face, including the two most important gender markers in that region: the hairline and forehead.

Through this approach, we’ve been able to provide our patients with improved results. Particularly those who have been affected by hairline recession or hair loss.

All forehead reconstruction patients now have the option to redefine their hairline with hair transplants (FUE or FUSS technique). We fill in peaks and recessions and round out the overall shape, all in the same operation, as shown in the photo collage. 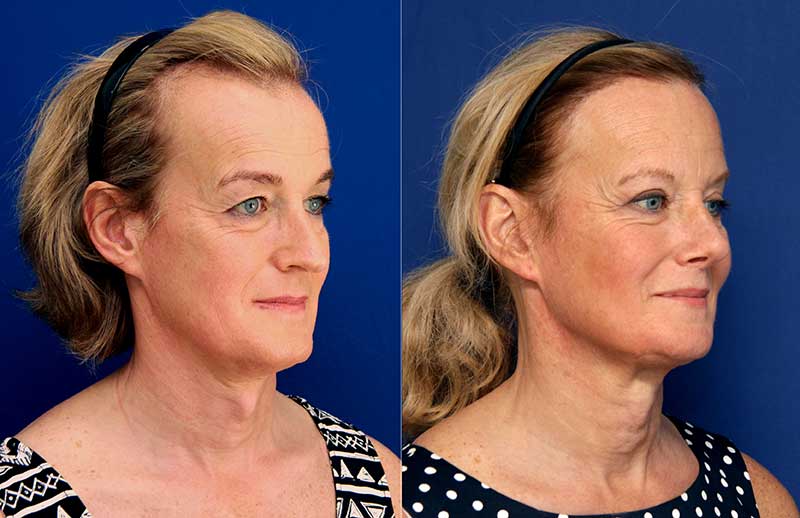 The patient undergoes the forehead reconstruction procedure under general anesthesia, where the frontal-orbital region is accessed through an incision made in the scalp near the crown of the head.

A strip containing many high-quality hair follicles is removed from the scalp as part of standard procedure. The follicular units (FU) from this strip (which is otherwise discarded) are harvested by highly trained technicians while the reconstruction surgery is being performed.

When the reconstruction is finished, the patient is transferred to mild sedation.

The hair transplant surgeon will then design the patient’s new hairline based on the structure of the patient’s facial features, the desired feminine shape, quantity of grafts available and corrections that may be needed for hair density in peaks and recessions.

Follicular transplants allow for a very natural hairline design, with softening of the corners and correction of hair loss to give a more feminine appearance.

The follicular units are carefully assembled by trained technicians using sophisticated technological instruments. They are inserted into the marked areas by the hair transplant surgeon.

As an added bonus, the closing of the incision in the scalp produces a slight, natural-looking brow and forehead lift. This contributes to the feminine aesthetic of the final results. 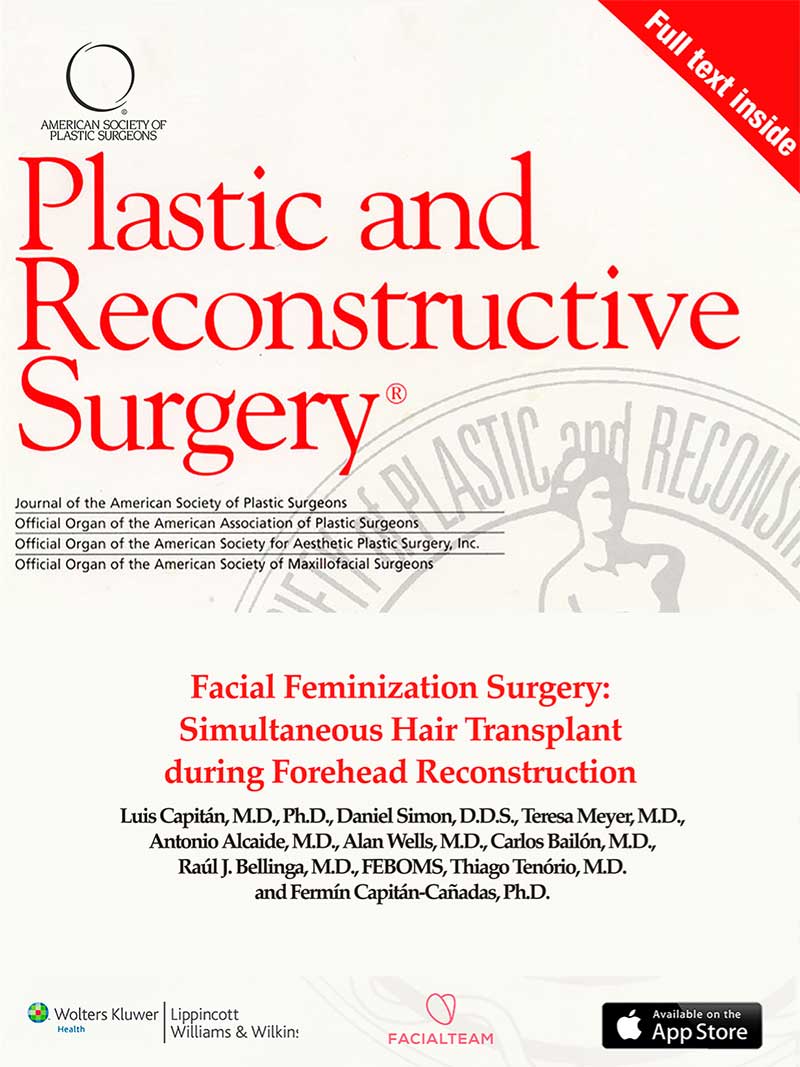 If you’re interested in learning more about the Simultaneous Hair Transplant technique, please read our scientific article recently published in the Plastic and Reconstructive Surgery medical journal of the American Association of Plastic Surgeons:

The experts at Facialteam are able to provide patients with the highest quality results in facial feminization currently available in the world thanks in part to the multidisciplinary nature and dedication to research and technological development.

We combine a surgical reconstruction of the forehead region with a natural hairline redefinition through hair transplants in a single operation.

This approach is a comprehensive innovation in the field of FFS surgery.