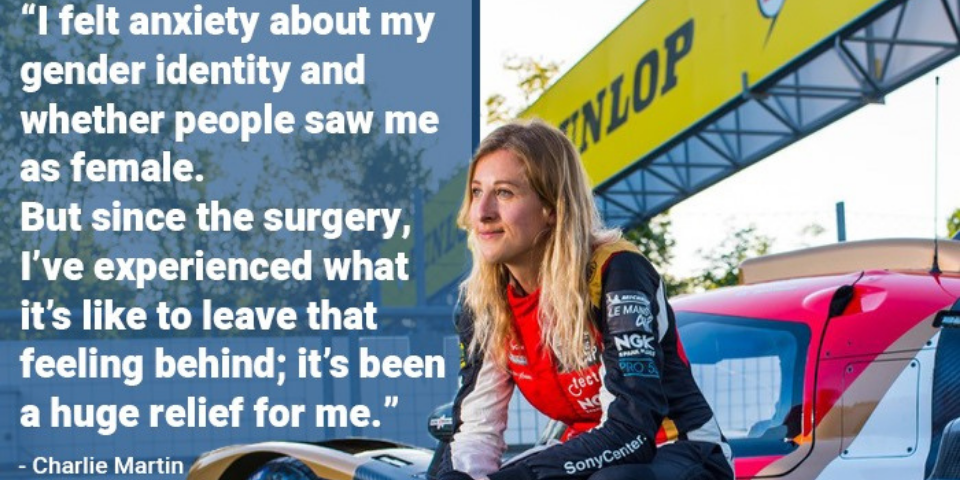 Be extraordinary, be a Proud Ally

With Trans events gone digital this year, we do our part by supporting and highlighting extraordinary people like Charlie Martin, LGBTI+ activist and race car pilot, who have provided inspiration by sharing their journeys of gender affirmation, coming out and transitioning publicly.

These women have become ambassadors for a significant community whose struggles for social acceptance need our attention. By telling their stories, they help to normalise the realities of the often misunderstood trans, non-binary, gender non-conforming and intersex minorities (TNBI). Unfortunately, it is still not enough.

Our gender non-conforming citizens need many more allies in order to spread acceptance deeper, both within and beyond the LGBTIQ+ initials.  FACIALTEAM has always taken strides to raise awareness year-round, not just during pride.  September is Suicide Awareness Month, and we are taking the opportunity now to share positivity: giving airtime to some extraordinary people as role models, talking about being an ally as a response to the problem of suicide among our dear peers.

Each year, our compromise to our patients grows, with renewed sponsorships such as those from 2019: Keystone, the PTWC, a scholarship for the inaugural New York Coming Out in the autumn. We encourage other businesses and corporations to follow suit and are pleased to have collaborators like Yeson Voice Center on board to offer their own forms of support in the past for celebrations like Sparkle and our free educational events in Australia.  This however, is far from enough.

Our home page has featured some of our exemplary patients, like pioneering athletes like Ella Licari of Australia and Tifanny Abreu of Brasil, among the extraordinary people that we are privileged to meet. In addition, we currently highlight Yakaru Dezaki, a senior software engineer for Amazon USA and Silvia Matos, CEO of Europe’s first lingerie fashion line in Spain, “TransLingerie,” as inspiration for people contemplating or struggling with transition.

The core message is that we are ALL extraordinary in some way, including trans people of course.   Yet it is not enough.

Humans indeed share life in common:  against all odds, we strive for goals and overcome some barriers along the way.  Certain patients in transition do have it easier than others on the journey to “be yourself,” with privileges due to their education, social or economic status, or lack thereof. It seems simple but unfortunately “being yourself” is a big mountain to climb for a person who lives in constant fear of discrimination, hate-crime, or extreme social rejection.

Embarking on a gender transition as an adult is in essence a catch-22. Access to vital transgender treatment is often prohibitive. It’s overwhelming: hormones, voice therapy, psychological support, hair removal, gender-affirming surgery and everything else associated with a gender transition. Without financial resources AND valuable moral support, it is inevitable that patients are often forced to “out” themselves in dangerous circumstances.

Most gender non-conforming people in the world have no government subsidized healthcare attention in the world, meaning standardized care is only accessible to those with sufficient economic resources who are able to travel. Fortunately, the public healthcare systems of many European countries do provide limited specialised attention for issues of gender identity.  Sadly though, it isn’t nearly enough.

As Charlie Martin pointed out in 2019, the situation remains critical:

“Trans patients are currently being forced to wait 2-3 years in the UK for an initial appointment with a GIC [Gender Identity Clinic] and trans related hate crimes have escalated by 81% in the last 12 months.”

Unable to continue suppressing their true gender identity for years on end, they have no choice but to expose themselves to the dangers of violence and bullying. This situation is further aggravated by the fact that they are often unprotected by government laws.  Clearly, this is one reason the trans minority suffers such an alarming rate of suicide.

FACIALTEAM’s charity actions in Spain have helped trans women in demonstrated high-risk circumstances have hope. Undoubtedly, this is still not enough.

Listen to your trans friends

Being an ally is really as easy as listening without judgement. Give your trans citizens a space to be heard, where they are not rejected. Speak up in defense of a colleague being criticised for their gender identity. Surely, just checking in on your TNBI friend today (or anytime) and show your support for their healthcare needs would be enormously appreciated.

For that one person, it may be enough in that moment.

Sarah O’Connell knows it works, sometimes spending hours on end chatting with her peers. Most recently, a Facebook friend thanked Sarah for making the call after reading a tumultous post on social media –which literally saved her life.

So help your trans, non-binary, gender non-conforming colleagues feel included. It matters, and in the long term, it is making a difference.