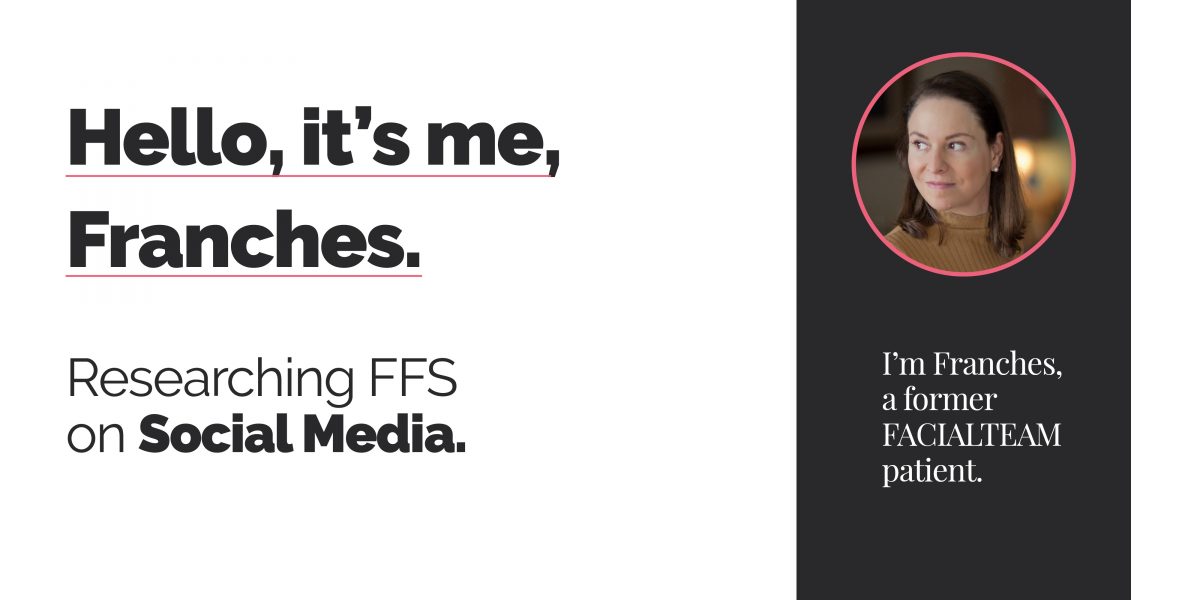 “Hello, it’s me.”  That’s actually the name of my blog, only in Spanish:  Hola Soy Yo.  I’m Franches, a former Facialteam patient.  In this series, I share my personal FFS journey with you. Last week, I discussed how online videos were important to my investigation. This post is dedicated to weaving through social media as part of your gender affirming surgery research.

I use social based websites with a fairly cynical eye. As soon as personal opinions become the main content I take them with a grain of salt. But having said this, reading about personal opinions in some cases helped me get a rounder perspective on the surgeon, the procedures and in general what to possibly expect. In fact, I did get the names of some surgeons from social media posts that I then went to research their work.

As I had stated before, for the purposes of researching for gender affirming surgery I prefer to read an online discussion than to get involved in one. The reason is that most of these discussions are between past patients and prospect patients, and as much as we as patients learn a lot about the processes, we’re no experts. As patients we have a single or a couple of personal experiences and that does not qualify us as experts. This means that most of the discussions are based on assumptions and interpretations rather than scientific facts. To compound the effect, often people talk about “a friend that went with such and such doctor or had such and such experience”.

Having said all the above, I was able to gather useful information from social media websites, though it required somewhat of a critical and cynical eye. In short, for me, I needed to put an effort in social media websites to distill what would be valuable to me from what I considered noise.

If you’ve never heard of realself.com, quoting their own website’s description, it’s a “destination for people to learn about cosmetic procedures, share their experiences, and connect with top providers”. From my point of view I see a trifold of interests: prospect patients looking for references, past patients sharing their experiences and surgeons showcasing their experience and knowledge.

By the time I first arrived to realself.com I had a preliminary list of surgeons from my FFS research. My first interest was to read the reviews that other patients had written about the surgeons in my preliminary list.  During my second research cycle (BA) I spent more time in realself.com than during the first cycle. There’s a few reasons for this. During my first cycle I had what I felt was a fairly solid short list of surgeons. Also during the second cycle I felt more comfortable sifting through social media discussions than during the first cycle. During my second research cycle I still had my eyes open to checking out other surgeons beyond my initial list. And lastly, I was also interested in compiling a comprehensive list of questions to ask my short listed gender affirming surgeons.

During my second research cycle (BA) I also paid attention to the questions that past patients posted, specifically about their recovery.  By doing so I tried to form a mental image of what recovery could potentially be. Similarly I spent time reading on the surgeon’s feedback and replies to those questions. Not so much to evaluate different surgeons but rather to hear about different approaches and suggestions for the recovery process.

Susan’s Place (susans.org) is one of the most respected forums on trans issues with thousands of subscribers discussing wide ranging set of topics related to the trans community, including surgical procedures.

Reddit is a huge community of communities with many discussing trans issues. Similarly to Susan’s Place there are thousands of subscribers.  For the trans community there is also an ever growing number of topics of interest ranging from personal issues to not-safe-for-work (NSFW) to surgeries. Opposite to Susan’s Place, Reddit’s membership is the general public, so sometimes the threads have the odd comments from people outside of the trans community.

In both cases the grand majority of the activity, discussions and contributions are made by members of the trans community.  Reading through the discussions one can get a great sense of what is important or of interest to the community.  When it comes to my personal approach of trying to create a shortlist of surgeons to scrutinize and determine if I would contact them or not, I found it difficult to get useful information on these sites. They had too much ‘chatter’ for my taste.

As I’ve said before, I try to prune through patient reviews to try to get the essence of the professionalism and experience of the surgeons. The main issue I had with these community sites was the sheer number of posts. Going in with an analytical perspective I found it overwhelming.

Having said the above, while browsing these sites during my FFS/HT research, I saw a number of posts and chatter about the surgeons that were already in my list. Reading through those posts gave me a little bit of information that later helped me create my shortlist.

Facebook as part of my gender affirming surgery research

During my first surgery (FFS/HT) research cycle I did not have a Facebook account so I didn’t have access to its communities and their resources. It was a few months after my FFS that I opened my Facebook account and started joining trans related FB groups, some of which were specifically around surgeries. When I first joined these groups I wanted to share my FFS experiences as my surgery was just a few months old and I was going through recovery. Later, as I started digging into BA, being part of these groups was somewhat useful.

Being part of the surgery centric FB groups I was able to hear comments from past patients as well as questions and concerns from people considering surgery. While I had my eyes open to learn about other surgeons apart from my short list, my interest on Facebook was mostly to get ready for the recovery process. For my personal objectives I paid attention to what people were saying about the BA recoveries and the different approaches to the surgery.

Pruning through social media posts takes me a fair bit of energy and I find Facebook “noisy” just because there are so many voices all saying something at the same time. Just like with other social media sites I find it time consuming and difficult to separate the essence of a post from the tinting or colouring that a personality may add.

One area that I found particularly difficult to deal with on Facebook was an echo chamber effect, where an idea gets amplified by repetition. This is where someone makes a post of their own or share someone else’s post or web article, and then more people share it again on other groups.  As different groups of people comment on the same post it makes it sound or feel as the original post is more important than it really is. To make things more complex, often the discussions about the original post drift into other either unrelated topics, or in many cases pure speculation.

As I’ve said before, we as patients are no experts so most of the comments we make are based on our own limited experience. When we post and when we read other’s posts we tend to forget that every individual is different, that every procedure is unique, and that what someone experiences may not necessarily be what we would experience even if it’s the same procedure with the same surgeon.

I had seen VirtualFFS.co.uk a number of years ago, but because I wasn’t interested in FFS then, I didn’t dig further back then. When I was doing FFS/HT research, apart from coming across it on my own, I saw a couple of references from Facialteam’s and another surgeon’s website to it. This gave me more confidence to approach VirtualFFS.co.uk.

When I contacted VirtualFFS.co.uk rather than looking for references for surgeons or wanting to see how specific procedures could change my face, I was looking for some guidance on the procedures that would benefit my particular case the most.  You can read “How I Chose The Best Surgeon for Me” and “How I Decided on My Treatment Plan” (links to those other articles).

First I requested a report with no images, and right away the decision of adding images to my request was a simple one. I truly learn a lot from my interactions with VirtualFFS.co.uk. The report for me was the most valuable as it listed most possible procedures and made specific recommendations and explanations based on the features of my face.

Apart from the report, the next big takeaway I got were the images themselves. It’s not that they were accurate to my final results, but they allowed me to understand the extent of my possible facial changes. The images showed me that my face would be changing little, and gave me a visual reference of the possible impact of the different procedures.  When I had the Skype consultations with the surgeons I had already shared with them the images and report from VirtualFFS.co.uk facilitating those initial discussions with the doctors.

I don’t need to tell you that the internet is an incredible resource for sharing information, and at the same time it’s the wild west where scammers and misinformation flourish, but I guess I just did. For this reason I am an advocate of using the internet as a research tool and not as a decision making conduit.

What I Would Do Different Today

When I started my first research cycle for FFS/HT I did not have a Facebook account and the official surgeons’ websites were probably the most important reference point for me. Now, with a Facebook account I have access to the discussions on the surgery groups and also more access to the personal profiles and pages for the surgeons.  In essence I would not change my basic approach to gender affirming surgery research of using the internet as a tool to shortlist surgeons, but now I would look at all the different outlets where the surgeons are.  What I mean is that instead of focusing on the surgeons’ websites, I would look for their presence on the social media sites (Facebook, Twitter, YouTube, Instagram, including RealSelf.com). By doing so, one can get a rounder perspective of the interests, experience and qualifications of the surgeons. As I’ve said a few times, for me, making a connection with the person or persons is very important. It comes down to that peace of mind component from my 3 criteria for surgery.

Apart from looking at the social media exposure from the surgeons now I know to look for the professional exposure too.  Things that are not that difficult to look for are published articles, though sometimes access to the articles themselves is not easy, one can see their contributions. Same thing about their involvement in surgical or medical conferences where sometimes one can actually see the presentation made by the surgeons. By watching the professional involvement of some of the surgeons gave me more confidence about their experience and also got to learn more details on the actual procedures I had.

About the Author of “Hola Soy Yo” 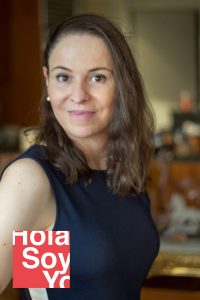 “Hello, It’s Me” (as translated to English) is by Franches, author and owner of HolaSoyYo.com,  a blog of thoughts and experiences with a unique trans-feminine perspective. Holding an MBA and BSc. in Industrial and Systems Engineering, she has taught at some of North America’s most prestigious digital media schools. Her facial gender transition surgery with Facialteam took place in October 2016.