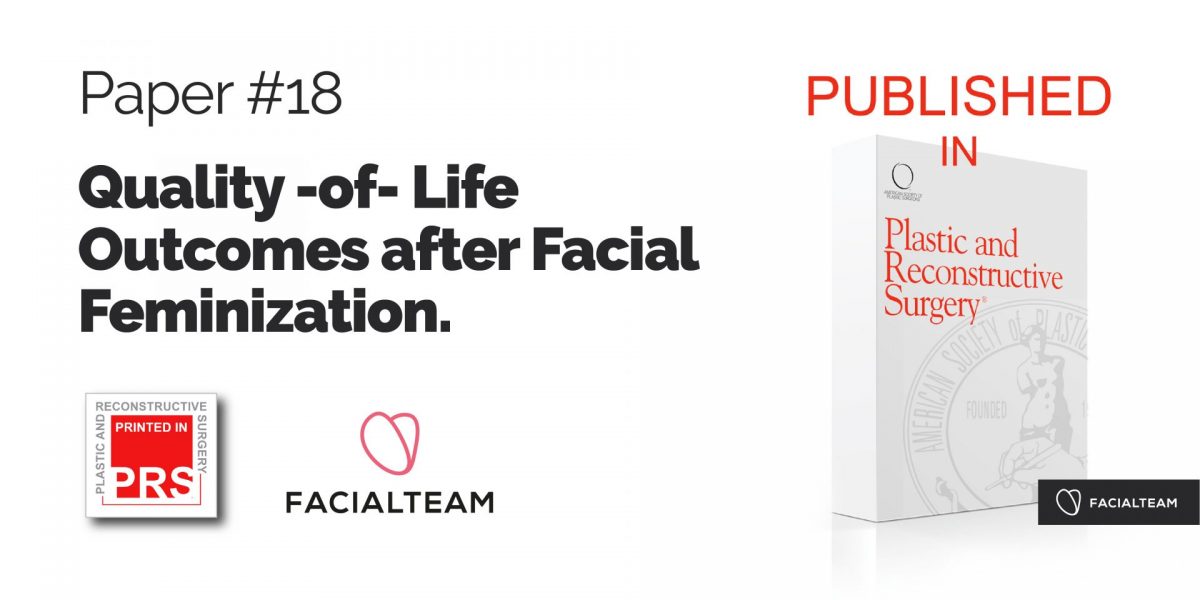 Study on Quality-of-Life after FFS Surgery

The study “Prospective Quality-of-Life Outcomes after Facial Feminization Surgery: An International Multicenter Study,” has been published in the medical journal, Plastic and Reconstructive Surgery (PRS). The American Society of Plastic Surgeons (ASPS) has also announced that the article has been voted “Best Paper” of their June 2020 edition, currently free to download.

Previous studies have reported incidental data on improved quality of life and mental health in transgender women after facial feminization surgery (FFS). Yet limited scientific evidence on these and other benefits of facial gender confirmation surgery remained to be proven, the reason behind this study.

New study on quality of life after FFS surgery

This is a multi-center study in collaboration with the University of Washington, Northwestern University, New York University, University Hospital Cleveland Medical Center, University of Michigan and Brownstein & Crane Surgical Services. It expounds subjective and objective evidence of how a more feminine appearance leads to improved quality of life for women with gender dysphoria.  The main conclusion is that the quality of life outcomes after FFS surgery are statistically significant, with the majority of patients reporting “very satisfied” both one month and again 6 months after the intervention.

Given the impact of this study in the controversial field of gender-affirming surgery, the journal’s editor, professor Rod Rohrich, summarizes it’s importance in a special “Hot Topic” video.

In addition, the prestigious journal invited third-party researchers from the  University of California to write an academic review of the study.

This groundbreaking paper was also highlighted in an ASPS press release the day of it’s publication with the statement,

“Facial feminization surgery is one of the fastest-growing areas in plastic surgery, and is increasingly recognized as a medically necessary treatment for gender dysphoria. The new report is one of the first prospective studies of FFS, using standard assessments performed before and after surgery.”

As it happens to be the 10-year anniversary of Facialteam in June, here are 10 questions about Quality-of-life outcomes after FFS surgery study which show the hard work, time-investment and expertise required to produce research at a top level.

1. How long did this take to complete?

Beginning in July of 2016, the researchers analyzed the outcomes of 66 consecutive patients who had facial feminization surgery at their two centers. The study was completed in July 2018, two years later. It took nearly another year to get the outcomes published, so three years in total.

2. Who were the lead researchers behind the institutions?

Five institutions and 2 private centers were involved in the group of 14 researchers involved. The lead authors were Shane D. Morrison, MD, MS, of the University of Washington, Seattle and Fermín Capitán-Cañadas, PhD, of Facialteam, Spain. Marina Conesa is our psychologist who relayed the surveys to patients at Facialteam and Anabel Sanchez is our Scientific Advisor, also of Facialteam, who helped managed the data for analysis.

It’s not easy getting authorization for this type of research and requires compliance with international standards.

The idea for the study was first presented in the USA, being financed by The Plastic Surgery Foundation.  In order for a non-USA entity to form part of the study, an elaborate report had to be presented on the details of the  project, time-frame, center candidacy, resumés of investigators, etc. This is a time-consuming and tedious process to ensure the study meets the scientific and ethical requirements, such as for the inclusion of human subjects.

Once the study gained legal backing, a scientifically significant quantity of patient volunteers needed to be found. So, the study was explained to the potential participants by a staff member versed in the study and consent procedures. After being given adequate time to review the informed consent before enrolling, 66 patients were enrolled at the two private practices, Brownstein and Crane Surgical Services (Greenbrae, Calif.) and Facialteam (Marbella, Malaga, Spain).

The requirements included being 18 years or older, were being seen in consultation for facial feminization surgery and determined apt candidates for surgery. No monetary payment was given and patients could choose to leave the study at any point. The process also was translated into Spanish for those who did not speak English and all conversation and follow-up for the study was completed in Spanish for this population, with appropriate cultural adaptation principles.

The survey constituted nine questions scored on a five-point Likert scale, where zero constitutes least satisfied and 4 constitutes most satisfied. Data was compiled to form a composite facial feminization outcome score where 100 denotes complete satisfaction. Aspects of self-perceived and other’s perception of their facial femininity and masculinity were asked as free response questions. Patient demographics including gender identity, age, education level, smoking status, employment, duration of transition, previous hormonal therapy, previous gender-affirmation surgery, and insurance coverage of gender-affirming surgery were collected. The procedures that the patients underwent along with complications were also recorded.
The survey was administered in three distinct phases: the quality of life before FFS surgery, within the first month postoperatively and, finally, the quality of life more than 6 months after surgery. Each survey was completed in person or electronically in a secured format. Standard photographs were also taken for patients at the same intervals.

5. Getting published in a peer-reviewed journal

It may seem simple, but the writing of a scientific article for printing in a medical journal is technical essay writing.

Once prepared and reviewed by all the participating authors, the paper may be submitted to a journal on the specific topic. If the editor of the journal believes the article is adequate and of interest to the scientific community, it will then be forwarded to a review board for a professional evaluation by third-party experts in the field who provide feedback. The editor will inform the authors of this feedback, which usually falls into four categories:

Both centers conducted  the recruitment and follow-up with their patients independantly, sharing the data telematically via encrypted platforms and with confidentiality secured by removing personal information in advance. All data was anonymized, protecting the identity of all patients.

7. Limitations of the study

Limitations exist in this study and include response bias of participants, differences in the techniques and procedures used in facial feminization surgery, as well as the use of a quality-of-life instrument (survey). The survery was not originally developed for the transgender or gender non-conforming population, although it was specifically adapted in advance with the transgender patient in mind. In addition, gender appearance and the general aesthetic outcomes scale used were not validated.

Our data support the concept that facial feminization surgery may be considered medically necessary for many patients. This implies that facial feminisation is not merely cosmetic. FFS surgery targets the gender dysphoria which inhibits patients ability to integrate fully in society, consequently allowing for an increased quality of life.

In line with the conclusions of the study, a designation of medical necessity by the World Professional Association for Transgender Health (WPATH) is often cited as support for insurance coverage of gender-affirming surgery procedures.

Unfortunately, facial feminization surgery needs to be considered medically necessary by insurers, instead of the traditional interpretation of procedures, such as rhinoplasty and chinplasty, as cosmetic or aesthetic in nature.

Studies are currently underway to develop a robust patient-reported outcome measure for the transgender and gender-diverse population.

This and other studies on the topic will encourage best practices guides such as WPATH’s SOC8 and other professional associations involved in trans healthcare.  More research on the topic is to be done before gender identity-sensitive data may reach it’s way into the action plans of the WHO.